DOES THE ALUMNI ASSOCIATION HAVE YOUR NAME AND ADDRESS ?

Hey! this is important:
Follow this link to update or add or change your name or contact information:

Last Blog Update: 01 DEC 2011:
This is (almost) everything that has been reported to us by WCHS contributors. We try to verify information that you send to Bonnie, but cannot guarantee the accuracy of absolutely everything that you see posted here.

Anyone can and should contribute news and information. If you have news, send it to Bonnie.

f you don't report it to Bonnie, it won't be posted!

WEST CARROLLTON, OHIO WEATHER RADAR
If there is no image, radar data is unavailable from NOAA, (Wilmington, OH NOAA-ILN).
Double click on this image for a larger view.

DOUG HOWE, '56, sent this to Bonnie (sorry about the late poas folks)

That part of the country has some fine motorcycle riding.
Just wanted to let you know that Flo (my wife) and I are still riding.
I'm 73 now and she is 70. We are riding a 1994 HD Classic. I'll
probably keep it a very long time....it is one of the last carburetor
models. We don't do much long distance riding anymore. Our
last long ride was a circle tour of Lake Superior in 2007. We do
mostly day trips now. The hard riding days and doing 75+ on the
Interstates is long gone for us. County and state roads are mostly
what we do. Too much attitude on the Interstates these days.
I hope we aren't the only ones still riding. It's too much fun to give up.
The jacket that I'm wearing went to Alaska with me in 1992...but not
this bike. I rode a 1991 HD Electra-Glide Sport (the pre-cursor to the
Road King) up the Alaska Highway. I haven't been to Sturgis as many
times as you. My first time was 1990 on a 1978 Super-Glide...with no
windshield or saddle bags. The bike pictured below has been to Sturgis
in 1997, 1998, and 2000. 2000 was the year that 750,000 bikers showed
up at Sturgis according to the Rapid City Press. They also reported an
estimated 40% of the bikes were trailered in. That ended Sturgis for me.
Anyway....keep the wind in your face and the rubber side down.
Have fun!
Doug Howe WC '56
Here are two recent photos. 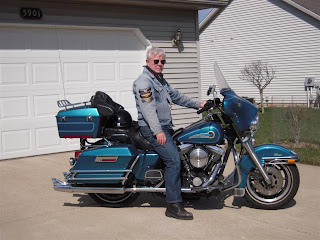 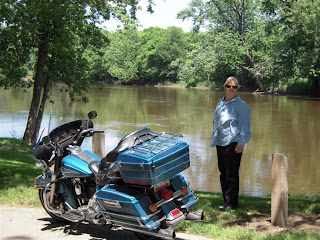 Hey, it's December and Bonnie is back!