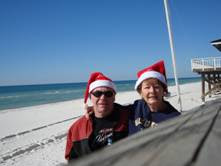 A HOLIDAY LETTER FROM THE FULLERS (JERRY, '60 and BECKY):

It's another great report from our most roving reporter, WC honorary alumnus, Rebecca A. Fuller. (Spouse is none other than 1960's GERALD A. FULLER, of course.) She has sent it on Christmas Eve, no less, so I'll also take this golden opportunity to wish all of you a Merry Christmas and a Happy New Year. To get current on the Fullers, please scroll down and read. I'm working on the newest WeCaTon bulletin and hope to get it out over the next week or 10 days. After that last one, I had to take a longer-than-normal break! Best to all.

Merry Christmas and a Happy New Year to you all! We are back in sunny Florida for the winter and although itâ€™s 70 degrees here today it was only in the fifties when we took the photosâ€¦see, itâ€™s not all gravy here! Jerry and I are wishing all of you a happy and healthy year. Weâ€™ve been blessed with good health and certainly wish the same for you and yours.

Well, although we are not going to stop traveling, we did sell the 5th wheel in June so any travel will see us ending up in a motelâ€¦or your houseâ€¦you just never know! We are sorry to say we missed the 24th Invantry Reunion in Oakland, California in June but we do promise to make it to Memphis â€™09. As most of you know, we built a condo in Louisville this past winter and moved in April 12. Since we had sold most everything when we went RVing we spent our California money on furniture! It really is comfortable in the new house and we love it. I expect weâ€™ll be spending April through October there in the future. We came back to Panama City Beach November 1st and will be here until March 15. I have a niece who persists in getting married in March so back north we go when the frost is still on the pumpkinâ€¦.hopefully it will be an early spring. I know, we are such wimps!

We had a lovely family reunion with Jerryâ€™s family at Norris Lake in Tennesse this summer. Sure hope we can do it again next year. My brothers and sisters and I did our annual bonding weekend and went to Ohio. The folks at the Comfort Inn are beginning to recognize us!

We did get to go back to Minnesota this summer for the annual PowWow and really enjoyed it. Butch and Duane were superb hosts and we had a great time. We also saw Clint and Susan who visit Panama City Beach in the winter while we were there. They had also come over from Wisconsin for the PowWow â€“ Clint was actually born on White Earth reservation some eighty odd years ago, so itâ€™s a real trip down memory lane for him.

Another great trip was to Savannah in August for Bobby and Merleâ€™s wedding. It was great seeing everyone and we were so glad to share the day with them, but I donâ€™t think weâ€™ll be going back in the height of summer again. It was 98 in the shade that afternoon! We did go over last weekend for Dot and Charleyâ€™s annual Christmas Party and a fun time was had by all. We always have such a good time with themâ€¦.wow, is it hard to believe that weâ€™ve been friends for 18 years, that Iâ€™ve been gone from Glick 17 years and married to Jerry for 17 years! Time does fly when youâ€™re having fun! Frankie, allergies and all, was kind enough to drive from Florida to Louisville to take care of Katie the cat while we were in Minnesota. Sheâ€™s originally from Louisville so she did get a chance to visit with friends while there. I hope to get the â€œinfamousâ€ Valley Girls, or at least some of them, to take a road trip this summer and come to Kentucky. The last trip of the year before we left Kentucky was to Dayton for the annual class reunion. Lyndia, Rick, Barry, Betsy, Joanne and Ron...you mean so much to us! Thanks for another
great reunion. The afternoon picnic at in the park was a great idea.

We were fortunate to welcome Entertainer of the Year (in our minds, anyway) Russ Chandler to our new home when he was on the way to Florida for a gig, Bob (Jerryâ€™s brother) and MaryEllen stopped and visited after the Fuller Weekend and we went to Churchill Downs for a lovely tour. Dot and Charley came up in October and we saved the Louisville Slugger Museum and My Old Kentucky Home trips to view while they were here. We have plenty of roomâ€¦come on down, or up as the case may be! 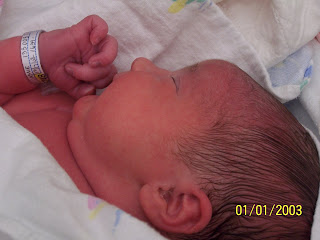 FREDA FLETCHER, '54, HAS A NEW GREAT-GRANDAUGHTER!
(We assume that the date on the picture is wrong - ed.)
This is the newest member of our family. My 10th treat grand daughter.....
The picture on the email is really big but if you click the attach you can get a regular size picture....Vanessa (my daughter, just sent this picture...
Freda

Bonnie Writes:
Please scroll down for the news on the latest WC passing (of which I'm aware). This RONALD PAUL JONES, who apparently died in a rest home, either late yesterday or early today. This notices came to us from 1955's NORMAN E. JACKSON, who says Paul was also 1955, although there's no yearbook photo. Paul and I grew up together on Miami Shores Drive and I remember him well. He came to the WC alumni gig in 2006 (I think, but maybe 2005) with my late sister, 1956's JUDY ANN RISNER. I'm pretty certain Paul did graduate and that the Piratan was printed during that ridiculous time when, if you hadn't paid in full for you senior pictures yet, they wouldn't put your photo in the Piratan. I don't know if Paul had family and I also don't yet know of any funeral arrangements. I'm sure something will be in the DDN in the next day or two, though. Condolences go out to any family Paul may have had.

Here is some news that I just heard and I don't know if you have heard it or not.
Paul (Ron ) Jones, class of 55 Passed away yesterday or early today. He has
a daughter in Michigan and it will be a couple of days before she can get down here, so it might not be in the paper for a couple of days.

His picture is not in the year book (1955 ) but I knew him well and seen him around town quite often. He worked for the Sheriff's Dept. before he retired. I think he was in a rest home at the time of his passing but not real sure of that.

Carolyn( Shell) Gephart -55- called me and told me. Her son is a member of the Montgomery County Sheriff's Dept. and he said it was going around the Department this morning.