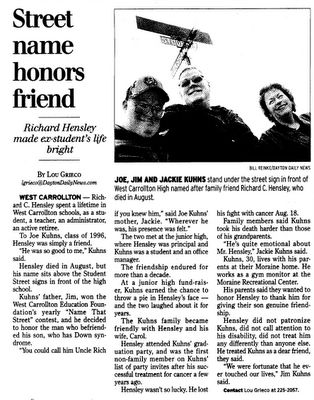 STREET NAMED IN HONOR OF THE LATE DR. RICHARD HENSLEY '59:
This article appeared in the Dayton Daily News, Feb 4, 2006. Submitted by Richard Holt '60.

RITA JUSTICE AUSTERA, '70, has checked into the blog from her home in Australia:

Greetings from Down Under. So good to hear from a fellow Pirate. :) Australia is both different and familiar at the same time. They have a lot of slang that makes you go "huh??" but I am getting used to it. Being married to an Aussie for 6 years before moving here helped. Sydney is very large and has about a 4 million population. It's very accessible, though. The public transportation is very good with trains going pretty much anywhere you want to go. There's also a monorail in the city. The harbour and beaches are beautiful. The water is so clear and turquoise blue. We apparently had record breaking heat this summer. New Year's Day was the hottest on record: 115. After living in Charleston, SC for 20 years, I was used to the heat and humidity but 115 is crazy. I found a website for a place in Melbourne called USA Foods. They carry a lot of stuff we had in the US that you can't find here. Such as Bisquick and Hidden Valley Ranch dressing. It's pricey but I hoard whatever I buy and use it for special occasions. My family sends me things from time to time, too, but shipping costs are very prohibitive. Everything here is pretty pricey for that matter. The Jeep Cherokee is $80,000. A Dodge Caravan goes for $65,000. A pack of Marlboro is $10. Houses start in the $500,000 range. A 2 bedroom apartment is no cheaper that $350,000. Good thing we're independently rich. haha. All in all, though, I do love it here and plan to stay. Good to hear from you. Say G'day to everyone for me. We are hoping to make the 40th reunion. Think I might get the prize for travelling the furthest distance. LOL Take care. 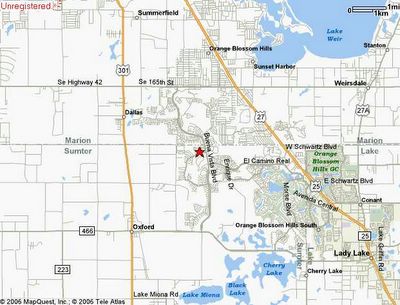 MAP OF THE VILLAGES AREA:

DRIVING DIRECTIONS TO 4th ANNUAL SPRING FEST (26 MARCH 2006);
*** This is all of the mail concerning the location

Bonnie Writes:
---Okay, I'm aware we're having a few problems with the street address for our Allamanda Clubhouse, which was so graciously secured for us by 1960's DAVID MAYS and wife Ann. A number of you have written to me about it. However, here's exactly how to get precise driving directions. I've done this, over and over, and it works each and every time. So while the postal service is insisting there is no such actual city as The Villages, I'm sure this goes by zip code and I've spent a considerable amount of time researching this. I don't want anyone getting lost or not showing up for any type of reason related to location. Ann, this DOES work, and thank you for letting me know the parts you did know.

Okay, everyone, log on to ( www.expedia.com ) Then, click on maps. Next, go to driving directions. Enter your complete starting address, including zip code. Then drop down and enter 1515 St. Charles Place, The Villages, Florida 32162, as your desitnation. It WILL come up with driving directions, I promise. We can deal with the city name stuff later, if ever. For OUR purposes, we're going to The Villages and it's in the south end. So let's all get there, hear?

It is my great pleasure to announce that our function for this year will be held at none other than The Villages! I'm thrilled about this, for many reasons. But we'll get to that, later. It will be held as originally planned, on March 26, at the Allamanda Clubhouse facilities.

---directions for the clubhouse, where we'll be holding the 4th Annual WC Florida Spring Fest. This comes to us, directly from our hostess, Annie Mays, spouse of 1960's DAVID MAYS. Of course, now that we have a street address, we can input it into the computer and get driving directions, also, as many of you have been asking. There's one other thing. I've had several e-mails from people, asking in what city The Villages is located. I guess that IS a bit confusing. The fact is, The Villages IS the name of the city! It's The Villages, Florida XXXXX, okay?

We'll do the usual, I suppose, as regards your food and drink for the day. But let's not bring such a huge over-abundance, as we did last year. I took home a whole carload of uneaten and untouched food, as I was the only one going to a nearby home with a fridge. So let's keep that in mind.

On another note, in regard to the death of JAMES H. SMITH, age 51, several of you pointed out to me that I had sent that with a 1982 class year. Naturally, that was a type-o, and I meant to write 1972. I was VERY good in math, when I was in school! But I just wanted to set the record straight. We really don't know for SURE that he was 1972, though. I assume that someone will send a note soon, designating his exact class year.

In closing, I will say that I'm SO looking forward to seeing ALL of you again, who are attending Spring Fest. It's shaping up to be a blockbuster year! For those who are traveling to be here, we wish you a safe trip. Now, be sure to scroll down for Ann's directions.
---And there you have it! More at 11--- B
-------Original Message-------

From: Ann Mays
Date: 02/04/06 11:49:11
It is Allamanda and the street address is:1515 St. Charles Place. This is located at the South end of the Villages...You must come all the way down Buena Vista Blvd. to Sunset Pointe entrance, drive several miles up Bailey Trail and turn left on St. Charles...about 1 more mile, The Recreation Center/Clubhouse is on the lef
- posted by Mikey @ 1:13 PM
Friday, February 03, 2006

James Smith has passed away. I didn't know him, but I feel a sense of loss, nevertheless, with each and every WC passing. Our thanks to the ever-vigilant DONNA G. TUDOR, 1955, for passing this along. -- Bonnie

Family-Placed Obituary
SMITH, James H. 51, of South Pasadena, died Tuesday January 31, 2006 at home. He was born in Middletown, OH and moved to Florida in 1982 from Columbus, OH. He was a graduate of West Carrollton High in West Carrollton, OH. He earned a Master's Degree in nursing from the University of Phoenix in Tampa, FL. He worked as a Clinical Nurse Specialist at the Bay Pines VA Medical Center in Bay Pines, FL. He was a member of the Pinellas Area Nurse Educators Association, the National Nursing Staff Development Organization, and Sigma Theta Tau National Honors Association for Nursing. He is survived by his mother Martha D. Trissel his step-father Robert L. Trissel both of Miamisburg OH; two sisters Shirley Ewert of Nashville, TN and Sandy Davis of West Carrollton, OH; and two brothers Jeff H. Smith of Whitley City, KY and Jon H. Smith of Dayton, OH. A Life Tribute Funeral Care Largo, FL.